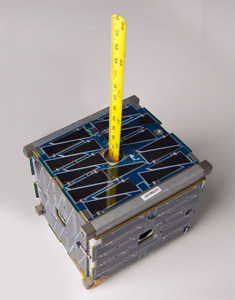 PhoneSat 2.0 is a technology demonstration mission consisting of a 1U CubeSat intended to prove that a smartphone can be used to perform many of the functions required of a spacecraft bus.

PhoneSat 2.0 also supplements the capabilities of PhoneSat 1.0 by adding a two-way S-band radio to allow engineers to command the satellite from Earth, solar panels to enable longer-duration missions, and a GPS receiver. In addition, PhoneSat 2.0 adds magnetorquer coils  electro-magnets that interact with Earth's magnetic field  and reaction wheels to actively control the satellite's orientation in space.

The satellite called Alexander was launched as a secondary payload on the maiden flight of the Antares-110 launch vehicle in 2013.

In improved version called Phonesat 2.4 was launched in 2013 on a Minotaur-1 booster under the ELaNa-4 mission.