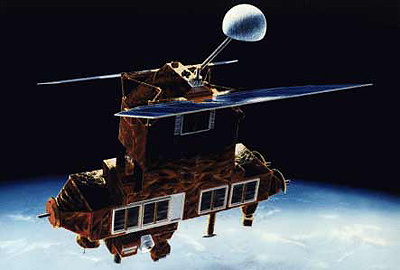 The ERBS spacecraft structure was composed of three basic modules: the keel module, the base module, and the instrument module. The keel module was a torque-box structure providing structural support for the propulsion system, the solar array panels, and the antennas. The base module was a torque-box structure that provided a direct interface to the Shuttle. The ERBE-nonscanning instrument and electronics was attached to the base module. The instrument module was mounted directly to the base module and housed the ERBE-scanner and the SAGE II instrument. Other ERBS subsystems included the Thermal Control Subsystem (TCS) for regulating heat dissipitation; the Electrical Power Subsystem (EPS) which consisted of two 50-amp-hour, 22-cell nickel cadmium batteries; the Power Unit (PCU) for regulating electrical power; the Command and Data Handling Subsystem (C&DH) for collection of instrument and spacecraft data for real-time transmission; the Communications Subsystem (CS), which included NASA TDRSS transponders and antennas; the Attitude Control and Determination Subsystem (AC&DS), a three-axis, momentum system for attitude pointing, maneuvers, and thruster control; and the Orbit Adjust Propulsion System (OAPS), a nonpropellent hydrazine propulsion system used for raising the ERBS to its operating orbit after launch from the Shuttle. The ERBS was held primarily in the Earth-pointing mode for most of the mission.