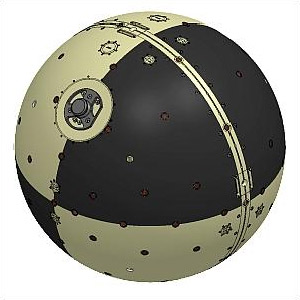 SpinSat (Special Purpose Inexpensive Satellite) is a small research satellite built by the Naval Research Laboratory (NRL) and to be launched by the DoD Space Test Program (STP).

The satellite is 56 cm diameter sphere, one of two left over from the ANDE 2 project, with a weight of 57 kg. It is powered by batteries. The payload is equipped with retro-reflectors, antennas, and Electrically-controlled Solid Propellant (ESP) Thrusters spread in pairs throughout the surface of the payload.

The SpinSat mission has three goals:

As a secondary mission, SpinSat carries a 9k6 GFSK UHF store and forward AX.25 packet system with 2 W of RF output for the radio amateur community.

SpinSat was set for "soft stowage" launch in the pressurized portion of the SpaceX Dragon headed to the International Space Station (ISS) in April 2014. A station crew member carried the sphere, essentially packed in a fabric bag, from the Dragon into the station and leave it there until its scheduled deployment through the Japanese module's airlock. NASA safety experts approved the mission because the satellite's 12 thruster-clusters burn an inert solid fuel, and only when an electric charge is passed across it.

SpinSat was successfully deployed from the ISS via the Space Station Integrated Kinetic Launcher for Orbital Payload Systems (SSIKLOPS) on 28 November 2014.