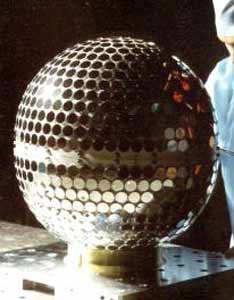 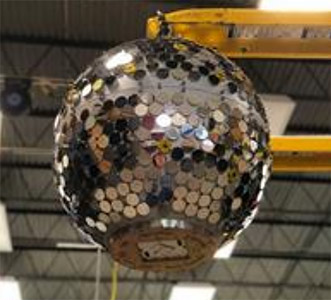 Project Starshine (Student Tracked Atmospheric Research Satellite for Heuristic International Networking Equipment) are optically reflective spherical student satellites, which have been designed by the U.S. Naval Research Laboratory and built by an informal, volunteer coalition of organizations and individuals in the USA and Canada.

Each of the satellites is covered by approximately 850 small, front-surface aluminum mirrors that are machined by technology students in Utah and polished by tens of thousands of students in schools and other participating organizations around the world. These mirrors have been coated with a scratch-resistant, anti-oxidizing layer of Silicon Dioxide by optical engineers and technicians at the Hill Air Force Base in Utah and the NASA Marshall Space Flight Center in Alabama.

During the satellite's orbital lifetime, faint sunlight flashes from its mirrors were naked-eye visible against the star background, during certain recurring morning and evening twilight periods, to student and adult observers around the world between the latitudes of 60 degrees north and 60 degrees south.

These observers measured the satellite's right ascension and declination by reference to known stars, and they recorded the precise timing of their observations by the use of stopwatches synchronized with international time signals. They used GPS receivers or United States Geological Survey 7 ½ minute quadrangle maps, or their equivalents in other countries, to measure the latitude, longitude and altitude of their observing sites. They posted their observations and station locations on the Starshine web site to permit computation of the classical elements of the satellite's orbit by the angles only method of LaPlace.

The first of these satellites, called Starshine 1, was deployed into a circular orbit 387 kilometers high by Space Shuttle Discovery STS-96 mission on 5 June 1999. Starshine 1 circled the earth every 90 minutes, descending and speeding up slightly during each orbit due to the effects of atmospheric drag, until February 18, 2000, when it was consumed by aerodynamic heating on its 4212th circuit of the earth at an altitude of approximately 80 kilometers above the Atlantic Ocean off the coast of Brazil.

The Starshine 1 satellite consisted of a hollow aluminum sphere, 48 centimeters (19 inches) in diameter, covered with 878 polished aluminum mirrors, each of which was 2.5 centimeters (one inch) in diameter. These mirrors were polished by 25,040 children in 660 schools in 18 countries. The spacecraft was mounted in and spring-deployed from a Hitchhiker canister in the orbiter's cargo bay. The weight of the hollow sphere was 39 kilograms (86.6 pounds). The plane of its orbit at deployment was inclined to the earth's equator by 51.6 degrees.

A second satellite, Starshine 2, was deployed from Space Shuttle Endeavor on December 16, 2001, near the end of Endeavor's STS-108 mission to the International Space Station. The satellite's initial altitude was 370 kilometers, and its orbital inclination to the earth's equator was 51.6 degrees. The 858 mirrors that covered the outside surface of this satellite were polished by approximately 30,000 students in nearly 700 schools in 26 countries. Engineers at the U.S. Naval Research Laboratory installed the mirrors on the Starshine 2 satellite shell and performed final acceptance vibration testing of the completed satellite, prior to its installation in a Hitchhiker canister at the NASA Goddard Space Flight Center. The satellite is the same size and mass as the Starshine 1 satellite, but it also contains a special cold gas spin system that rotated the satellite at 5 degrees per second as it was deployed from the Space Shuttle. This motion was designed to increase the number of flashes of sunlight that can be seen as the satellite travels across the sky. In addition, Starshine 2 carries thirty one laser retro-reflectors, distributed evenly across its surface, to permit the International Satellite Laser Ranging Network to track it.

Starshine 2 descended into the lower atmosphere and flamed out on 26 April 2002. The fact that its orbital lifetime was so much shorter than that of Starshine 1 was due to its slightly lower deployment altitude, coupled with unusually high solar activity.

Starshine 4 has been assembled and tested, and its 1000 mirrors have been polished by 1000 schools and other participating groups in 43 countries. Starshine 4 was originally scheduled for launch on Space Shuttle Atlantis's STS-114 mission. It was to carry 31 optical retroreflectors identical to those on Starshines 2 and 3. It was also to carry a Starshine 5 subsatellite in its interior and was to release Starshine 5 into its own orbit about one minute after being itself deployed from Atlantis. Comparison of the relative decay rates of the orbits of Starshines 4 and 5 were to allow researchers to derive atmospheric densities more precisely than they have been able to do previously.

With the Space Shuttle program having ended, no more flight opportunities for Starshine 4 and 5 were available anymore and the program has been cancelled and the satellite has been put into storage. A flight on an early Orion CEV mission to the ISS was considered, but this opportunity also ceased to exist after the cancellation of the Constellation program. Eventually Starshine 4 (without Starshine 5, as a completely passive payload was required) was launched in May 2020 on the maiden flight of Virgin Orbit's air-launched LauncherOne rocket, but failed to reach orbit.