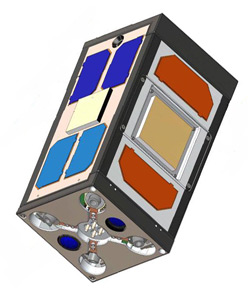 The PSSC-Testbed 2 (Picosatellite Solar Cell Testbed 2) is a picosatellite measuring 5" × 5" × 10" and weighing 3.7 kg. It is integrated onto Atlantis (STS-135) under the management and direction of the DoD Space Test Programs Houston office at NASAs Johnson Space Center. PSSC-Testbed 2 will be ejected shortly before shuttle re-entry into a low (less than 360 km altitude) orbit with an expected orbital lifetime of three to nine months, depending on solar activity. Multiple on-board megapixel cameras will image Atlantis as the satellite departs, thus supplying the last in-orbit photos of NASAs workhorse human space transportation system for the last few decades.

After the satellites orbit lowers for approximately one month, four ammonium perchlorate solid rocket motors will provide 40 Ns of impulse each and could extend orbital lifetime by an additional two months or alternatively, actively deorbit the satellite. The PSSC 2 bus, MTV and CTECS experiments will be controlled by a primary ground station at The Aerospace Corporation in El Segundo, Calif., and secondary stations that comprise the Aerospace Corporation Internet-based Picosatellite Ground Station Network.

One of the solid rocket motors was fired on 4th November 2011, slightly raising the orbit and sending the satellite into a tumble. Over the next one and a half months, the remaining four motors were commanded to fire, but none of them did. The satellite finallydecayed from orbit on 8th December 2011.