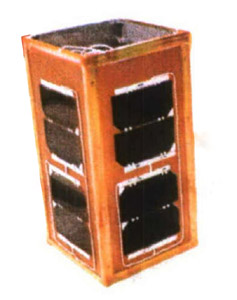 The PSSC-Testbed (Picosatellite Solar Cell Testbed) flight experiment is designed to obtain space environment degradation data for advanced solar cells. The purpose of this particular experiment is to develop and operationally test the picosatellite and associated ground station.

The PSSC Testbed flight experiment is designed to provide the United States Air Force with space flight data that will be used to validate performance models for new multijunction solar cells. The total size of the PSSC Testbed is 5 inches by 5 inches by 10 inches. The satellite will have four Emcore Very High Efficiency solar cells mounted on each of the two sides and four Spectrolab XTJ solar cells mounted on each of two sides, which have dimensions of 5 inches, by 10 inches.

The Aerospace Corporation has developed a Pico Satellite spacecraft bus, which includes a solar power system with the capability to characterize new solar cells. This picosat could be the starting point for the development of a responsive space vehicle that would provide the capability of obtaining actual space environment exposure of new solar cell technology in a time frame that is in sync with the new generation solar cell's introduction cycle. Once this vehicle is flown successfully and demonstrates its capability, the spacecraft bus can be used as a standard testbed for any type of future solar cells with minimum modification.

Presently, there are two missions to be flown.

The first mission has been flown on Shuttle flight (Endeavour F22 (STS 126)) in mid 2008. The satellite was deployed from the airlock of the ISS after the orbiter departed.

The second mission featured some more experiments and a solid fuel propulsion.