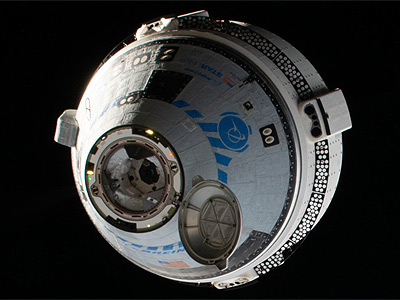 The Starliner, formerly known as CST-100 (Crew Space Transportation 100), is a space capsule privately developed by Boeing to carry up to seven people to and from low earth orbit to carry crews to the ISS and the planned Bigelow Aerospace Orbital Space Complex.

The capsule has an Apollo-like shape and uses the Boeing Lightweight Ablator (BLA) for its heatshield. For docking with the space station, Starliner will use an NDS (NASA Docking System) docking adaptor. Starliner will be reusable for up to 10 missions.

The capsule is designed to be compatible with the Atlas-5(N22)¹, Delta-4M+(4,2) and Falcon-9 launch vehicles. In August 2011 Boeing announced, that the Atlas-5(N12)¹ launch vehicle was selected for the first flights. Later it was upgraded to the Atlas-5(N22)¹ version. ULA provides launch services for an autonomous orbital flight and a crewed launch, originally planned for 2017. Later, the Atlas will be replaced by the Vulcan Centaur VC2N launch vehicle. The launch vehicle delivers Starliner on a suborbital trajectory and the capsule uses four of its orbital maneuvering and attitude control (OMAC) thrusters to circularize the orbit.

Boeing received US$ 18 million from NASA under the CCDev program and US$ 92.3 million under the CCDev2 program to mature the CST-100 design. In September 2014, Boeing's CST-100 was selected for the commercial crew program and received a funding of $4.2 billion. Under this contract, Boeing will build three spacecraft - one to undergo a pad-abort test in 2016 and one for an uncrewed flight in early 2017, leading up to the first crewed flight to the ISS in mid-2017. In September, the name Starliner was announced to replace the designation CST-100. The first crew mission was oredered in June 2015 and a second mission was ordered in December 2015. In May 2016 it was announced, that the first crewed flight was delayed to 2018. In January 2017 four more missions were ordered. The maiden flight has now been delayed to December 2019.

On the maiden orbital flight, the Starliner had an off-nominal orbital insertion, but reached a low stable orbit. Due to excessive fuel use of the OMAC thrusters, a rendezvous with ISS became impossible. The mission was cut short, but the capsule landed successfully at White Sands Space Harbor.