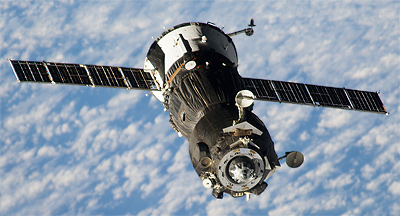 The modified Soyuz TMA crewed spacecraft for transporting Crews to the ISS has been developed on the basis of a Soyuz TMA spacecraft. In the new version, the Argon-16 computer (introduced on Soyuz-T back in the 1970s) is replaced by the new TsVM-101 computer. The latter is a much more capable computer, is almost 10 times lighter (8.3 kg vs. 70 kg) and much smaller. The analogue telemetry system is also replaced by a smaller digital telemetry system called MBITS.

It is to provide rescue of the main crew of the station in emergency and delivery of visiting crews.

During a pressure test, the descent module of vehicle №704 was damaged beyond repair. The descent module was replaced with the one, which was originally planned to be used in vehicle №707. This repaired vehicle received the serial number №704A and flew on the Soyuz-TMA 07M mission.

During the missions of both Soyuz-TMA 14M and Soyuz-TMA 17M, one of the solar arrays remained stuck after launch and deployed only during the docking with the ISS.