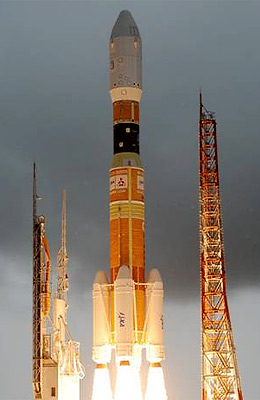 The H-2B rocket is an more powerful development based on the H-2A rocket to launch the HTV (Kounotori) cargo vessels to the ISS.

The H-2B launch vehicle is a LOX/LH2 fueled two-stage rocket, as the H-2A, but has a first-stage body of 5.2 m in diameter compared with 4 m for the H-2A and features two instead of one LE-7B main engines. The H-2B first stage holds 70% more propellant than that of the H-2A. The first stage is augmented by four SRB-A3 strap-on solid rocket boosters. The second stage is the same as used in the H-2A and is powered by a single LE-5B engine.

→ all launches of H-2 family vehicles