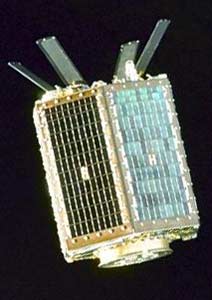 The MightySat 1 payload will launched from the Shuttle via the Hitchhiker Ejection System, which is managed out of the Goddard Space Flight Center in Greenbelt, MD. The payload will deployed on flight day twelve.

The primary objective of the MightySat program is to provide on-orbit demonstrations of emerging technologies. Data from the mission will be used to support decisions on the readiness of the tested technology for Air Force missions.

The Mightysat-1 payload is a non-retrievable spacecraft that was be deployed from the Space Shuttle Endeavour on STS-88. The MightySat payload has five advance technology demonstration experiments:

MightySat 1 was spring-ejected at a minimum rate of 1.7 fps from the HitchHiker canister in the payload bay of the Shuttle orbiter.

The spacecraft reentered the Earth's atmosphere on Nov. 16, 1999 due to its relatively low orbital altitude. All of the mission objectives were accomplished.