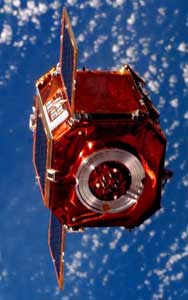 Satellite de Aplicaciones Cientifico-A (SAC-A) was a small non-recoverable satellite built by the Argentinean National Commission of Space Activities (CoNAE). The satellite will test and characterize the performance of new equipment and technologies which may be used in future operational or scientific missions.