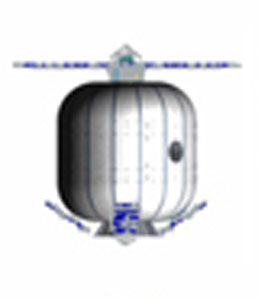 Galaxy is a technology demonstration for the inflatable Nautilus space station structure as a prototype for a space hotel by Bigelow Aerospace.

Bigelow Aerospace has kicked off development of the Galaxy advanced technology demonstration program, which is intended to be launch-ready in the fall of 2008.

Galaxy will bridge the evolutionary development between the Genesis-class vehicles and the vehicle to follow – Bigelows first human-inhabitable module, Sundancer. Galaxy's primary purpose is to provide critical risk reduction, as well as first-flight experience for technologies being developed and intended to be flown on Sundancer and the operational fleet of standard-sized vehicles.

While Bigelow will leverage proven processes and technology learned in the development and flight of Genesis I and II, a number of technological advances will be implemented on Galaxy. These include:

Galaxy will also have a 45% larger usable volume than its Genesis precursors.

Galaxy design work and prototyping will extend through 2007, and will be integrated through 2008 in order to support launch readiness in the fall of that year. In August 2007 Bigelow announced, that they do not intend to launch the Galaxy spacecraft due to rising launch costs, although the spacecraft (or at least parts of it) will be built for ground tests. Bigleow will directly move on to launch the Sundancer space station.