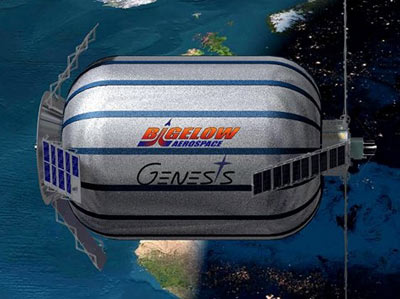 Genesis Pathfinder is a technology demonstration for the inflatable Nautilus space station structure as a prototype for a space hotel by Bigelow Aerospace.

Once in Earth orbit, the one-third scale hardware is to produce important data regarding multiple features of a full-scale spacecraft. Genesis 1 will be pressurized with nitrogen, but later units will use an oxygen/nitrogen mixture. Genesis includes also windows and an airlock simulator with key seal interfaces. Genesis is 10 ft×8 ft in size when inflated.

The Genesis spacecraft is fitted with several cameras monitoring the inside and outside of the spacecraft. Inside are free floating photos and personal objects provided by commercial customers to be monitored by the cameras. A NASA experiment, the GeneBox Microlaboratory, is also onboard to test new technologies, which will be used in GeneSat biological nanosatellites.

The space firm is keen on spurring private ownership and use of space stations by making habitable space modules affordable for corporate communities. Under several agreements with NASA, Bigelow is drawing upon NASA's TransHab inflatable structures program, although the private company is pioneering its own design.

Bigelow Aerospace confirmed that the Genesis Pathfinder module would be lofted by the Falcon-9 booster, provided by Space Exploration Technologies Corporation (SpaceX). Bigelow Aerospace has executed a launch agreement with SpaceX. No details regarding price or conditions of sale are available. But following delays of the Falcon development, both Genesis spacecraft were orbited by Dnepr launch vehicles.

Genesis 2 is a similar, yet improved vehicle with upgrades to vehicle control and sensory equipment.

The vision system contains marked improvement in design over the system in Genesis I. Considerable effort has been made by Bigelow Aerospace engineers to improve the overall performance, reliability, and data-flow capabilities of the vision system to enhance the images from each of the 22 cameras onboard Genesis II. Technology demonstrators include a refined networking architecture over the Genesis I design, dual FireWire and Ethernet camera interfaces, and multiple new camera types including articulated cameras and a wireless camera for additional exterior shots.

The images recorded from the 22 onboard cameras are expected to be sent back to the mission control headquarters, giving the public a chance to view payloads on and in Genesis II. The payloads have expanded upon Genesis I in complexity and number.

As a stepping-stone to crewed missions, the Genesis II sensor suite has been improved with additional pressure, temperature, attitude control and radiation detection sensors. This will allow Bigelow Aerospace to better characterize the low Earth orbit (LEO) environment and the impact it has on spacecraft components, both interior and exterior. These new improvements also affect the revamped habitat for small-scale biological organisms and bugs. The new habitat includes new air and water-handling control systems, environmental sensors and robotic manipulators as preparation for the accommodation of larger life systems.

Genesis II is equipped with a distributed, multi-tank inflation system. This is an improvement on the single-tank design of Genesis I. By using multiple tanks, the reliability of the inflation process is increased and allows for discrete gas control. This is the next evolutionary step toward maintaining the multiple gas supplies needed for future man-tended vehicles.

Genesis II contains the same core attitude (guidance) control and stabilization system used on Genesis I with improvements that give ground control more refined pointing control and a faster dampening of the initial tip-off rate or body rotation from rocket separation. The basic magnetic torque rods, magnetometer, GPS and sun sensors from Genesis I are augmented on Genesis II with new reaction-wheel assemblies and a precision measurement system. The reaction-wheel system allows for the significantly faster body rate settling time and provides a technology demonstration capability needed for the larger future vehicles.