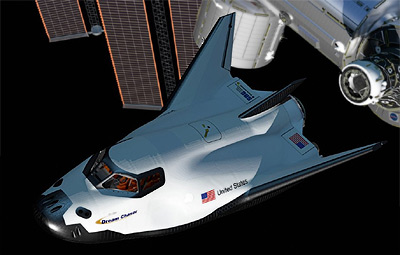 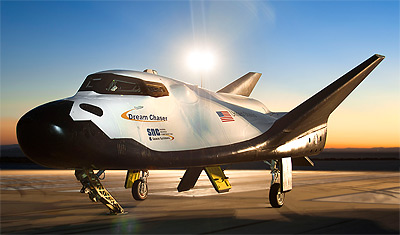 The Dream Chaser is a planned crewed orbital lifting-body space plane being developed by SpaceDev, now a subsidiary of Sierra Nevada Corporation (SNC). Dream Chaser is designed to carry up to seven people to and from low earth orbit to carry crews to the ISS and potentially to other private space stations. The vehicle would launch vertically on an Atlas-5(412)¹ and land horizontally on conventional runways.

The reusable Dream Chaser is based on the NASA developed HL-20 lifting body shape. For docking with the space station, Dream Chaser will use an rear mounted APAS docking adaptor.

The propulsion system for launch escape, orbital maneuvering and deorbiting is planned to consist of two in house built hybrid rockets based on the SS1 design. In mid 2014, it was reported to have been changed to a ORBITEC built liquid fuel system using propane and liquid oxygen as fuel.