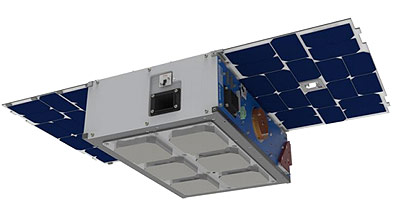 CICERO (Community Initiative for Cellular Earth Remote Observation) is a constellation of 24+low-Earth Orbiting (LEO) micro-satellites for performing GPS and Galileo radio occultation (GNSS-RO) of Earths atmosphere and surface remote sensing by GNSS reflection. They are operated by GeoOptics.

The system will deliver critical data on the state of the earth to scientists and decision makers worldwide. Products will include high-accuracy profiles of atmospheric pressure, temperature, and moisture; 3D maps of the electron distribution in the ionosphere; and a variety of ocean and ice properties. Principal applications will be weather forecasting, climate research, and space weather monitoring.

Originally GeoOptics developed CICERO 115 kg microsatellites together with the University of Colorado Laboratory for Atmospheric and Space Physics (LASP) using the TriG GNSS-RO payload developed to fly on the FORMOSAT 7 / COSMIC-2 mission. Later during development, the massive miniaturization of the GNSS-RO payload, called Cion, allowed the satellite design to be changed to a much smaller 6U CubeSat based version built by Tyvak Nano-Satellite Systems.

At least one more satellite was built by Orbital Solutions Monaco (OSM) on Tyvak's design and is owned by OSM. This satellite is operated with the GeoOptics satellites for a share on the revenue.

CICERO will be built up over time, starting with the launch of a first pathfinder spacecraft in mid 2017. The first four operational satellites, called OP-1 constellation, will follow soon after.

For later launches, GeoOptics reportedly has an agreement with Virgin Galactic to use the LauncherOne rocket.

CICERO satellites are launched as secondary payloads and on shared launches: