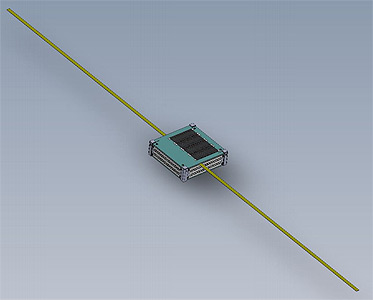 The mission is to test the worlds smallest two-way communications satellites to serve as a cost-effective low-data rate Internet of Things (IoT) network connectivity solution for remote and mobile sensors. The initial experimental space deployment is comprised of four satellites, each with a 1/4U form factor employing radar signature enhancement technology, which enables them to be passively tracked, and using VHF band frequencies for communications. There will also be an experimental deployment of ground stations for communications with the space units.

The mission is to demonstrate the capabilities of these picosatellites for serving low data rate communication relays for remote sensors and data collectors. Experimental operations is scheduled to begin upon launch for a period of at least 6 months and up to 2 years

The tiny satellites have very small radar cross section, which might complicate the tracking. Therefore they featured a GPS device in each satellite that would broadcast its position on request. Also the four smallest faces of the satellites are covered with an experimental passive radar reflector developed by the U.S. Navys Space and Naval Warfare Systems Command, which according to the FCC application would increase the satellites radar profile by a factor of 10.

The FCC dismissed Swarms application. Nevertheless, the satellites have been launched, apparently without a valid licence, in January 2018 on an Indian PSLV-XL rocket under the name SpaceBEE. The ownership of the SpaceBEEs remained obscure, until in an IEEE Spectrum article the identity of the SpaceBEEs with Swarm's BEE satellites was revealed.

A follow-on mission, SpaceBEE 5 to 8, with larger 1U CubeSats was also not granted a licence after this. Later the licesnce was granted. SpaceBEE 1 to 4 were also granted an operation licence.

The operational 2nd generation SpaceBEE satellites reverted back to the 0.25U form factor.