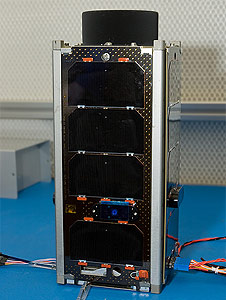 UCLSat provides demonstration of in-house technology development and carries two payloads to monitor the space environment. The first, Ion and Neutral Mass Spectrometer (INMS) is a common instrument across a number of the QB50 satellites. The second contains a suite of sensors to analyse the energetic particle and magnetic field environment. Data from these instruments was to be transmitted to the ground.

It carries a Science Unit (SU) named INMS (Ion/Neutral Mass Spectrometer) for sampling of low mass ionized and neutral particles in lower thermosphere, such as O, O2, and N2.

The satellite is one of six QB50 science satellites, which were to be launched on a Dnepr rocket on the QB50-DS flight. When the availability of Dnepr launch vehicle had become doubtful, they were transfered to an Indian PSLV-XL launch. The satellite was deployed in orbit, but does not appear to work.