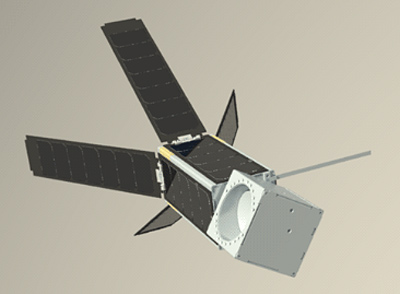 MicroMAS 2 (Micro-sized Microwave Atmospheric Satellite), is a two three-unit CubeSat mission being developed by the Space Systems Laboratory to integrate an MIT Lincoln Laboratory microwave radiometer payload with a three-axis stabilized CubeSat bus as a follow on to the MicroMAS mission.

Each CubeSat comprises a 2U spacecraft bus with an Attitude Determination and Control System (ADCS), avionics, power, and communications, and a 1U spinning radiometer payload with highly integrated, compact microwave receiver electronics.

In order to effectively collect data with the radiometer sensor, the spacecraft must simultaneously sweep the radiometer field of view perpendicular to the groundtrack while maintaining a 3-axis stabilized orientation fixed in the local vertical local horizontal frame. Analysis determined that it would not be possible to spin the entire satellite and simultaneously maintain the LVLH orientation. This attitude control problem led to a novel design solution to implement a dual-spinner design on the CubeSat architecture, in which a custom designed spinner assembly, would join the rotating payload module to the rest of the satellite.

The MicroMAS-2 demonstration mission now in development is funded by the United States Air Force and the National Oceanic and Atmospheric Administration.

MicroMAS 2b was selected in February 2016 by NASA's CubeSat Launch Initiative. It was to be launched on the ELaNa-20 mission on a dedicated LauncherOne, but was removed from this flight.