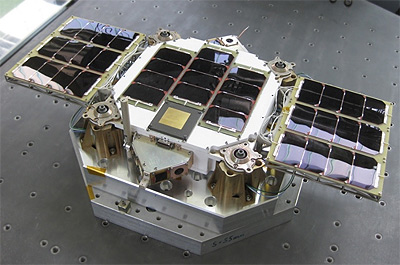 Venta 1 is a nanosatellite with Automatic Identification System (AIS) receivers for supervising ship traffic in Europe. The satellite was built by the University of Applied Sciences, Bremen, Germany for Latvia under the contract with the University College Ventspils and VATP Latvia., and the signals aired by the satellite will be received at the Ventspils International Radio Astronomy Center.

Venta-1 carries a LuxSpace 1st generation SATAIS-receiver as the main payload. Additionally there is a small camera for low resolution earth monitoring.

The AIS data will be downloaded via a dedicated S-band frequency link. The satellite is attitude controlled via magnetic torquers around three axes and stabilized by a slow rotation around the sun generator axis pointing to the Sun.

Venta-1 was stacked for launch together with Max Valier Sat. Both payloads separated only in orbit after being deployed together by the PSLV launch vehicle.

On the surface of the satellite, a prototype femtosatellite (sprite) for Breakthrough Starshot is fixed. It is similar to the Sprites to be deployed from KickSat.