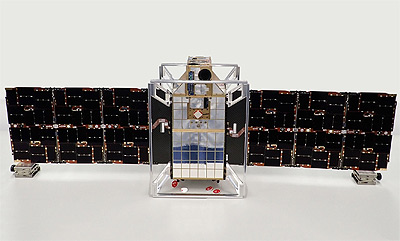 EG (EchoStar Global) is a S-band IoT (Internet of Things) constellation by EchoStar Global LLC, an Australian subsidiary of EchoStar.

EchoStar Global is in the process of designing, constructing, and launching a new NGSO MSS system to provide narrowband data services, including machine-to-machine and Internet of things communications, throughout the globe. The system is based on licences of Sirion, a Helios_Wire subsidiary), which was acquired by EchoStar in 2019.

The satellites are 6U CubeSat built by Tyvak Nano-Satellite Systems. Pursuant to Australian authorization and International Telecommunication Union (ITU) filings for the SIRION-1 network, the EG System is licensed to provide MSS on S-band frequencies at 2000-2020 MHz (uplink) and 2180-2200 MHz (downlink). The System will consist of a constellation of approximately 28 satellites in low Earth orbit.

Initial operations will consist of EG-1, which was successfully launched in August 2020, and EG-3, scheduled for launch June 2021. Additionally, EchoStar Global has acquired ownership of Pathfinder 2, launched in December 2018, for operations under the SIRION-1 ITU filings.

EG 2 (Tyvak 0171) was launched in September 2020 on a Vega rocket. It is unclear, if this satellite is operational.