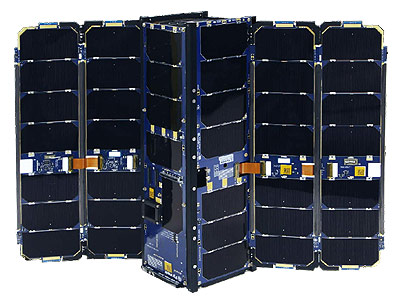 GeoStare, known by the manufacturers designation Tyvak 61C, is a 3U Cubesat mission designed by Tyvak to test the use of CubeSats as Space Situational Awareness observatories. It is to test an optical telescope system that can be used for Earth and space observation, monitoring of space objects including space debris, and to catalog variability of luminous stars.

The instrument built by the Lawrence Livermore National Laboratory (LLNL) is a monolithic lightweight optical telescope called MonoTele, which measures as small as 8.5 centimeters in diameter and is so compact that the satellite it is mounted on can be smaller than traditional space vehicles. It is a high-resolution monolithic optical telescope systems, fabricated from a single piece of fused silica, for deployment on small satellites. It is highly compact and extremely robust against vibration loads and temperature swings. The satellite is built by Tyvak.

This demonstration system, which was launched in early 2018 into low-Earth orbit, has produced excellent imagery of both stellar fields and ground targets. Potential applications under consideration for the low-cost imaging system include commercial and government Earth observation, space debris detection and tracking and astronomical science observations.

One advantage of the telescope is that it can take images of space in daytime and night during its 95-minute orbit of Earth, whereas terrestrial telescopes can only take images at night.

The satellite was originally to be launched on the 4th Electron KS rocket with the ELaNa-19 mission, but was removed from this flight. It was launched in January 2018 on an Indian PSLV-XL.

Follow-on 6U missions planned for flight in 2019 and larger variants to follow.