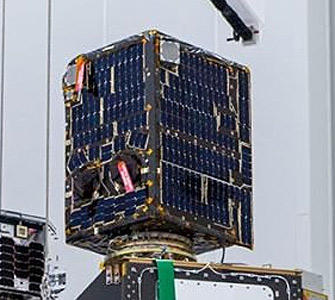 The 150 kg satellite is built by Maxar Technologies (formerly Space Systems/Loral, SS/L) based on their small SSL-100 bus. Athena will use E-band high-frequency millimeter-wave radio signals that promise much faster data rates. PointView expects its E-band system to get download speeds of around 10 Gbps at its ground stations, with uplink speeds topping 30 Gbps. The mission will be to determine whether such satellite communications can efficiently provide broadband access to unserved and underserved areas throughout the world.

Reportedly it is also to test a laser ground link.

Athena was launched the first Small Spacecraft Mission Service (SSMS) on a Vega launch vehicle in September 2020. The satellite was successfully placed into its intended orbit but developed increasing spin rates during its first several orbits. Through several ground interventions, the satellite spin rates have been substantially reduced, and the satellites attitude has been brought under control.

In July 2021 Pointview announced, that the Athena test mission has been paused indefinitely.