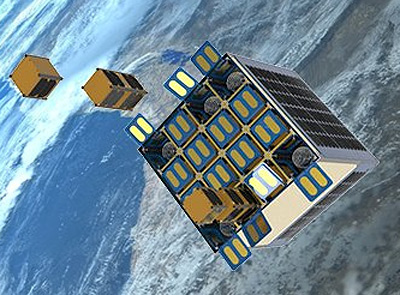 The ION-SCV (In Orbit Now - Satellite Carrier Vehicle), developed by Italian company D-Orbit, is a free flying CubeSat deployer and technology demonstrator, will be launched on Vega in 2019 from the Guiana Space Center, Europes Spaceport in Kourou, French Guiana. The CubeSat carrier will host several CubeSats to be deployed once in orbit.

Positioned in a sun-synchronous orbit at 500 km, ION-SCV will deploy the hosted CubeSats one by one along the orbit in precise orbital slots, according to customers specifications. After the CubeSat deployment phase, which may last up to one month, ION CubeSat Carrier will initiate the in-orbit validation phase of payloads directly integrated on the platform.

The first mission, ION-SCV 1, was launched on the first Small Spacecraft Mission Service (SSMS) on a Vega launch vehicle in September 2020, carrying 12 Dove cubesats for Planet (Flock-4v 15, ..., 26). After the deployment, it is to perform some IOD/IOV of dedicated payloads, culminating in the demonstration mission of an onboard propulsive module that will be used commercially starting on the next mission scheduled in December 2020.