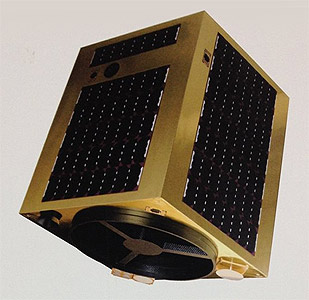 The 50 kg class satellite is built on a 50 cm × 50 cm × 70 cm structure built by AxelSpace built platform based on the Hodoyoshi-1 satellite. It features an optical imaging system based on a 40 cm diameter Cassegrain telescope with 3720 mm focal length and an detector based on the EOS 5D mk.3 camera with 5760 × 3840 pixels. This imaging system provides an 1 m ground resolution from a 600 km orbit with a 6 km × 4 km frame size.

Also an experimental Magnetic Plasma Deorbit System is onboard, which employs the satellites magnetic torquers to generate a magnetic moment that interacts with the ram plasma flow to create a plasma drag force.

The satellite was launched in June 2017 as a secondary payload on an Indian PSLV rocket.

CE-SAT 1B (or CE-SAT 1 Mk.2) is the first mass-production model. It was launched in July 2020 on an Electron KS launch vehicle, but failed to reach orbit.