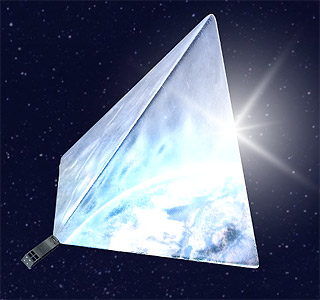 Mayak is a Russian cubesat developed by a group of young scientists named "Your sector of space" with support of the Moscow State University of Mechanical Engineering (MSUME). Mayak is intended to become the brightest orbital object in the night sky by deploying an optical reflector.

In orbit, the 3U CubeSat will deploy four triangular reflectors, 4 m2 each, which form a tetrahedral shape. The reflectors are made from metallized membrane with reflection coefficient of 95%. The reflector will provide a -10 optical magnitude at the beginning of the flight to allow for easy tracking. Mayak will be put into a tumbling motion over all axes, with at least 1 revolution per second.

The satellite mission has three objectives:

The satellite was launched successfully in July 2017, but has failed to deploy its reflectors, either due to a manufacturing fault or because of a problem during separation from the launch vehicle. There are no plans for a replacement satellite.