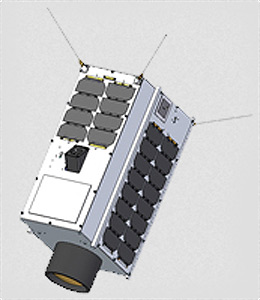 The satellite is a next generation greenhouse gas monitoring satellite. The satellite will demonstrate an advanced miniature hyperspectral SWIR imaging spectrometer for monitoring targeted greenhouse gas emitters such as area fugitive sources (tailing ponds and landfills) and stacks (emissions such as flaring and venting). A secondary instrument will measure clouds and aerosols in order to enhance retrievals from the primary instrument. The 15-kilogram satellite will be a precursor to a commercial constellation of greenhouse gas monitoring satellites as part of a service provided by GHGSat Inc. The low-cost and high-performance of SFLs NEMO bus is an enabler for this mission.

The bus is the next evolution to the Gryphon Bus (GNB) technology and provides a foundation for future high-performance nanosatellites from the Space Flight Laboratory (SFL). The bus has a primary structure measuring 20 cm by 20 cm by 40 cm and is capable of peak power generation up to 80 W. A minimum of 30 W is available to the payload, which enables the bus to support a dedicated state-of-the-art high speed transmitter. The bus is designed with a total mass of 15 kg, 9 kg of which is dedicated to the payload. It can be configured for full three-axis control with up to 1 arcmin pointing stability.