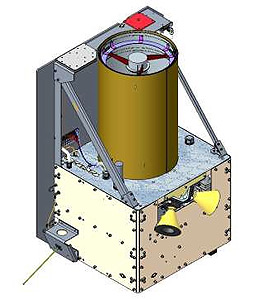 The BlackSky constellation of 1 m resolution earth observation microsatellites will be deployed by BlackSky Global.

The satellites feature the SpaceView-24 imaging system built by Harris Corp.'s Exelis with an aperture of 24 cm It has a ground resolution of 0.9 - 1.1 m from an orbital height of 500 km. They have a onboard propulsion for a 3 year orbital life. The satellites are built by Spaceflight Services based on their SCOUT bus.

The operational Block 2 satellites feature some improvements over the Block 1 Pathfinder satellites. They have increased solar arrays and can image in in four bands and panchromatic mode. Each can produce 1000 images per day, both in stills or video mode.

The first four satellites named BlackSky 1 to 4 followed in 2018 and 2019 on four seperate launches, a PSLV, a Falcon-9 v1.2 (Block 5) and two Electron KS rockets, to form the backbone of the operational constellation.

Note: As long as the individual serial numbers are not published, the satellites are designated on this website with placeholder designations like "x1". When the proper designations are known, the placeholders will be replaced.