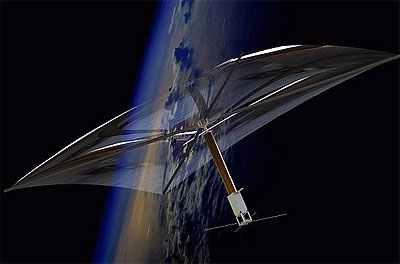 InflateSail is a British 3U-CubeSat developed by SSC (Surrey Space Centre) at the University of Surrey and is one of the technology demonstrators of the QB50 mission.

The InflateSail nanosatellite is equipped with a 1 m long inflatable boom and 10 m2 deorbiting sail. InflateSails primary goal is to demonstrate the effectiveness of using a drag sail in LEO to increase the rate at which satellites lose altitude and reenter the Earths atmosphere. A system like this could be fitted before launch to any satellite bound for LEO, and then used at the end of the satellites life to remove it from orbit, and prevent the satellite from being involved in any potentially disastrous debris-creating collisions in the future.

The satellite is one of two QB50 IOD satellites, which were to be launched on a Dnepr rocket on the QB50-DS flight. When the availability of Dnepr launch vehicle had become doubtful, they were transfered to an Indian PSLV-XL launch.

InflateSail decayed from orbit on 3 September 2017.