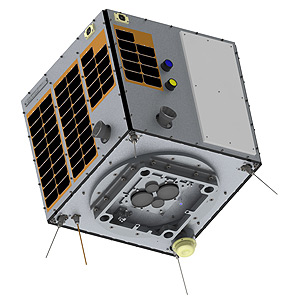 WNISAT 1R (Weather News Inc. Satellite 1R) is a microsatellite for north arctic routes and atmosphere monitoring. The project is started from the commercial objects between Weathernews and Axelspace. The object of the WNISAT-1R mission is monitoring of the Northern sea routes and of the CO2 content of the atmosphere.

The 40 kg satellites is an improved follow-up mission to WNISAT 1R. It is large and built on a 52 × 52 × 50 cm cube structure inherited from Hodoyoshi 1 and is three-axis-stabilized.

Equipped with blue, green and red optical cameras and a near-infrared camera, it will be able to take photos of the arctic ice several times every day. These images will be then used by Weathernews to predict the distribution of ice in the area and make the passage of commercial ships on those routes as safe as possible. Compared to its predecessor WNISAT-1, WNISAT-1Rs ground feature resolution is far higher, allowing for more reliable estimations of the ice distribution.

For measuring the CO2 content, the satellite emits laser beams at wavelengths of 1556 nm and 1570 nm. The lasers illuminate an area of about 10 km diameter. The reflected light is detected by the satellite.