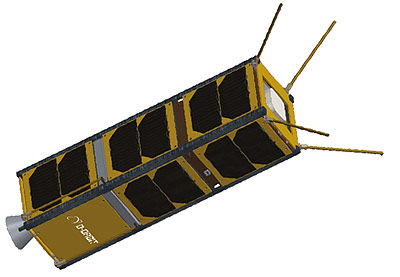 The D-Sat (Deorbit Satellite) is a 3U CubeSat mission by Italian company D-Orbit to demonstrate active end-of-life reentry.

The satellite carries D-Orbit Decommissioning Device (D3), a device with three key characteristics. First of all, it needed to be compact and lightweight, easy to integrate it inside existing satellite platforms during design and manufacturing. Second, it had to be able to execute a quick and direct re-entry maneuver at the end of the satellites mission. Finally, it had to be independent from the main spacecrafts systems, so it would work even in case of major malfunction of the hosting satellite. It is a smart propulsive system that can be scaled to easily fit any size spacecraft. Its compact solid rocket motor is designed to execute a single high-trust burn to quickly remove a spacecraft form orbit. Its independent control unit and communication system ensures that the system can be activated and controlled from the ground even if the spacecraft has ceased operations.

The satellite was launched on 23 June 2017 as a secondary payload on an Indian PSLV-XL rocket.

On 2 October 2017, the deorbit motor was fired, but instead of deorbiting, a misalignment of the motor with the satellite center of gravity caused a tumble during the motor's burn and the orbit was raised to 506 km × 686 km, 97.6°.