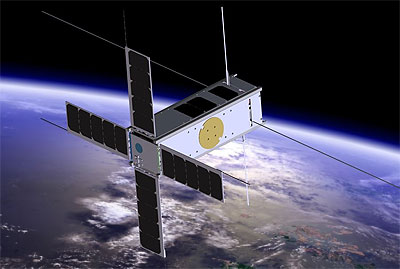 PICASSO (PICosatellite for Atmospheric and Space Science Observations) is a Belgian 3U CubeSat, designed to investigate the upper layers of Earths atmosphere.

PICASSO is developed for the QB50 project for ESA by the Belgian Institute of Space Aeronomy (BISA) with VTT Finland and the UKs Clyde Space, PICASSO will measure the distribution of ozone in the stratosphere and profile the temperature of the mesosphere and the electron density in the ionosphere.

PICASSO features a miniaturized multispectral imager for atmospheric limb sounding with the Sun as the light source, and a multineedle Langmuir probe (mNLP) sampling the electron density of the space around it. PICASSO is built to the 3U-CubeSat standard.

PICASSO is one of a number of CubeSat missions being backed by the In-Orbit Demonstration element of ESAs General Support Technology Programme. It was to be launched in 2016 as part of QB50, a network of 50 CubeSats to probe largely unexplored layers of Earths atmosphere. It has bee dropped out of the QB50 framework and is planned now for a 2019 launch.