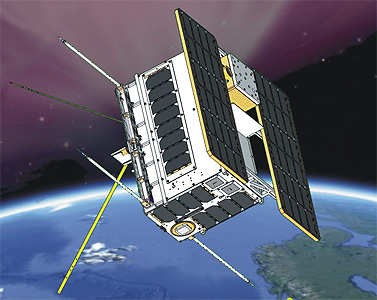 The Norsk Romsenter (Norwegian Space Centre) signed a contract in June 2013 with UTIAS (University of Toronto, Institute for Aerospace Studies) for the construction of the NORSAT 1 microsatellite. For less than 20 millon NOK, the University of Toronto will construct the platform for the satellite and integrate the payloads before launch.

NORSAT-1 will carry an AIS-receiver for performing ship detection from space. The new AIS-receiver will be more advanced and employed to test out new detection algorithms. This AIS-receiver will detect and track maritime traffic in Norwegian and international waters via the Automatic Identification System (AIS).

The instruments will cover several aspects of scientific research focusing on the sun, including measuring Total Solar Irradiation (TSI) with one instrument, and measuring electron plasma from the sun with a Langmuir probe (LP). The two instruments are being constructed by Norwegian and international research teams, and were chosen because they were the furthest along in their development process and fit the overall plans for the satellite best.

NORSAT-1 was launched to a polar orbit at approximately 600 kilometers height. It was to fly in April 2016 as a piggy-back payload on the Sentinel 1B mission on a Soyuz-ST-A Fregat-M rocket, but was removed from the launch due to a faulty monting bracket. A replacement launch later in 2016 is evaluated.