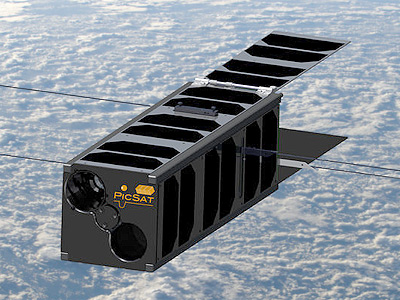 PicSat is a French 3U-CubeSat mission designed to measure exoplanetary transits. The development of the CubeSat is conducted within the High Angular Resolution Astronomy group at LESIA. The PicSat satellite uses interferometric instrumentation, integrated optics, and single-mode fibre filtering for the study of stellar environments.

The primary objective of this project is to observe the transit of the planet Beta Pictoris b as it passes in front of its star. The planet was first discovered by Anne-Marie Lagranges team using ESOs Very Large Telescope (VLT) array in Chile. The team discovered a planet orbiting at about 10 AU from the star Beta Pictoris, thanks to the use of VLTs adaptive optics system (Lagrange et al., 2009). Measurements taken between 2003 and 2015 have refined its orbital parameters and this suggests that the planet (or at least its Hill sphere) passes in front of the star. Moreover, these measurements are consistent with the November 1981 event, where important photometric variations were measured from the ground. If this planet has actually passed that year, the next transit would take place between July 2017 and March 2018 for an eccentric orbit of 0.12.

The science instrument on-board the PicSat satellite has been specifically designed for the observation of the transit ß Pictoris. It is capable of achieving high precision photometric measurements on bright targets, in the visible band (up to 100 ppm/hour on ß Pictoris, which has a magnitude of 3.86 in the visible band). To do so, it uses a 5 cm optical telescope, coupled to a state-of-the-art single-pixel avalanche photodiode by a single-mode optical fiber. The photodiode provides extremely precise measurements of the number of photons hitting the telescope at any given time, and the optical fiber, with its very small core, helps to get rid of all the background noises (light coming from the Moon or the Earth, and scattered by the telescope structure, for example).

But because the optical fiber is so small (about 3 µm in the focal plane of the telescope, which is equivalent to about 2 arcsec on the sky), a very fine pointing system is required, to ensure that the fiber will always stay centered on the science target. This is achieved by a dedicated algorithm driving a two-axis piezoelectric actuator on which the fiber is mounted.

The satellite was launched as a secondary payload on an Indian PSLV launch in January 2018. It operated initially, but on 20 March 2018 the satellite fell silent. On 5 April 2018 the end of the mission was declared.