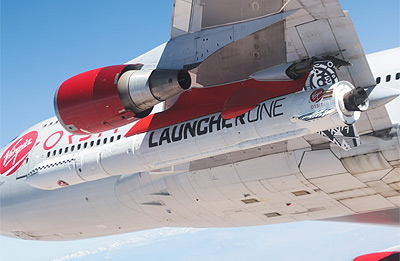 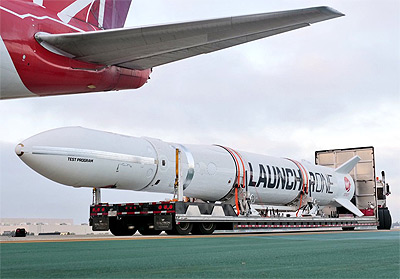 LauncherOne is an expendable, two stage rocket with liquid RP-1 kerosene and liquid oxygen as propellants . The first stage is powered by the Newton-3 engine. The second stage, featuring the Newton-1 engine, is reignitable for orbit insertion. Payloads will be accommodated within a fairing approximately 1 meter in diameter, with a cylindrical shape for the first 77 cm and a conical section above.

LauncherOne is being developed by The Spaceship Company (TSC) of Mojave. TSC is a partnership of Virgin Galactic and Mojave, Calif.-based Scaled Composites, a subsidiary of Northrop Grumman. The stages and shroud, including structures, engines, and Launch Vehicle/Pylon Interface, will be manufactured at TSCs FAITH production facility. Other components, such as avionics and secondary subsystems will be delivered to the production facility by world-class suppliers.

After lift-off with the carrier aircraft, LauncherOne will be released from the airplane at an altitude of approximately 15 km above mean sea level. LauncherOne will free fall for approximately four seconds before the first stage ignites. The two stages operate in sequence, with the potential for the second stage to relight, and the payload is delivered to a designated low-earth orbit.

Originally it was to use the same WhiteKnightTwo (WK2) mother ship as the crewed suborbital SpaceShipTwo. Sometimes in 2014, the concept was scaled up for increased performance, using the larger NewtonThree and NewtonFour engines and a Boeing 747-400 carrier plane called "Cosmic Girl" replacing the smaller WhiteKnightTwo.

A maiden launch is planned for 2017. Initially, LauncherOne missions will be staged from Mojave Spaceport. Virgin Orbit has completed launch assessments the primary launch site of the Mojave Air and Spaceport (MHV) in California and for a variety of operating locations including the Shuttle Landing Facility (SLF) at the Kennedy Space Center (KSC) in Florida, NASA Wallops Flight Facility (WFF) in Virginia. Virgin Orbit is prepared to obtain approvals to operate in locations other than Mojave based on customer interest. Newquay airport, Cornwall, in the UK is also planned as a launchsite. Guam has been selected as a launch base for low-inclination orbits. Virgin Orbit is also assessing launch operations at Ellison Onizuka Kona International Airport in Hawaii and the former Roosevelt Roads Naval Station in Puerto Rico.