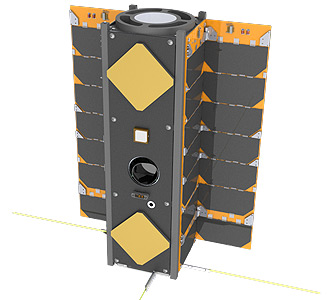 TRISAT is an educational 3U CubeSat satellite mission led by the University of Maribor, which aims to establish a mutual cooperation between Slovenian university students and the Slovenian space industry.

It helps to facilitate a knowledge and technology transfer between the university and the economy through innovations and technologies and with effective support of entrepreneurship and innovative ecosystems, resulting in a symbiotic relationship between both spheres.

TRISAT is a small spacecraft, capable of capturing short-wavelength infrared spectrum images of the Earth. This remote sensing data could be used, for example, to detect various vegetation patterns (green areas), to assess damage caused by natural disasters, and to detect volcanic dust.

During normal operating conditions the spacecraft will operate in idle mode, where it will point towards the sun, gather energy. The imaging payload and the payload high throughput communication subsystem operating in S-Band frequency range will be turned off. The satellite will periodically transmit unsolicited telemetry data in UHF radio amateur band as well as respond to telecommand requests from the ground segment in the VHF radio amateur band. Other modes will be entered via the OBC scheduler, which is synchronized to the GNSS time and location. A typical in-orbit operation and demonstration cycle includes two phases, both entered via the scheduler commands.

In the imaging phase, the satellite will point the imager towards the earths surface and gather imaging data. Afterwards, it will return to idle mode. The data will then be stored inside the OBCs mass storage, where thumbnails will also be generated. The gathered image data will be transferred to ground segment using payload high throughput communication subsystem. The satellites CCSDS compatible primary full-duplex communication module will operate in VHF and UHF radio amateur bands. Extensive telemetry will be provided by the satellites on-board data handling as part of the beacon including many housekeeping parameters. A novel Total Ionization Dose sensor value will be included within the beacon telemetry data, which will give useful information about the Total Ionization Dose accumulated during among satellites orbit. Furthermore, the telemetry will include satellites in-orbit location provided by the onboard GNSS receiver. As part of the radio amateur services the CCSDS compatible fullduplex communication module will act as a digipeater relaying CCSDS compliant data framing, which will be publically available to the radio amateur community.

The data obtained during the mission will be kept by the University and used for academic research purposes and will be made available to potential users.

TRISAT was launched on the first Small Spacecraft Mission Service (SSMS) on a Vega launch vehicle in September 2019. It will remain operational for a minimum of six years in a day-night sun synchronous orbit with an altitude of 530 km.