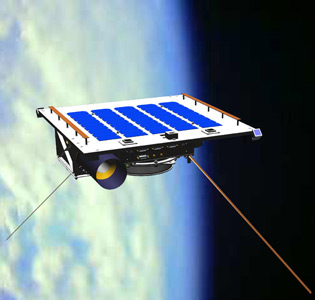 Max Valier Sat (formerly known as Max Valier) is a 15 kg nanosatellite with an X-ray astronomy payload and an amateur radio payload.

It is built in collaboration by the Gewerbeoberschule "Max Valier" Bozen, the Gewerbeoberschule "Oskar von Miller" Meran and the Amateurastronomen "Max Valier". The Max Planck Institut für extraterrestrische Physik Garching provides the small X-ray telescope µRosi, which allows amateur astronomers for the first time to see the sky in X-ray wavelength. OHB-System provides support and the launch opportunity on an indian PSLV rocket.

The full attitude controlled satellite will scan the sky for bright X-ray sources. Originally a LuxSpace AIS-receiver and a CMOS camera were to be on board, but these were dropped during development.

The X-ray telescope will have scanned the whole sky after half a year. The data will be evaluated and published by amateur astronomers. The spacecraft mechanical design basic idea follows a flat satellite concept with direct integration of spacecraft components and electronic boards into load carrying unibody structure. The spacecraft will have a body mounted non deployable sun pointed solar array.

To achieve effective power generation and solar array sun pointing, the satellite is attitude controlled in 3 axes and spin stabilized in one axis with momentum wheel. The main board controller is fully redundant and a complete proprietary development of the GOB Bozen. It manages the periphery with 8 serial interfaces and numerous further ports. Communications will be performed via amateur radio frequencies.

Max Valier Sat will be stacked for launch together with Venta 1. Both payloads will separate only in orbit after being deployed together by the PSLV launch vehicle.

Also on board are some experimental payloads by OHB/Hochschule Bremen, which are registered at the ITU as Venta 2.

On the surface of the satellite, a prototype femtosatellite (sprite) for Breakthrough Starshot is fixed. Four more freeflying Sprites are to be deployed later from Max Valier Sat. They are similar to the Sprites to be deployed from KickSat.