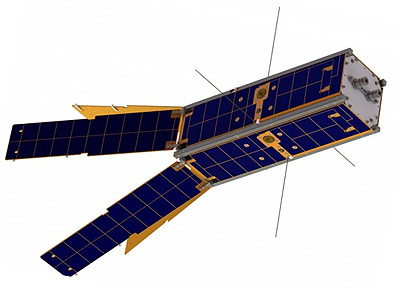 LituanicaSAT 2 is a 3U-CubeSat project being developed by the Vilnius University.

LituanicaSAT-2 is 3U CubeSat in-orbit technology demonstration mission led by Vilnius University. The mission is a part of a network of 50 nano-satellites called  QB50 that was launched together in 2016 from the ISS. The science objective of the mission is to carry out long term measurements of key parameters and constituents in yet largely unexplored lower thermosphere and ionosphere. The satellites was deployed into a circular orbit at an altitude of 500 km.

LituanicaSAT-2 is consisting of three main modules: a science unit with the FIPEX (Flux-Φ-Probe Experiment) sensor for QB50, a functional unit with NanoAvionics Command and Service module plus power unit and an experimental unit with the green propulsion system.

JSC NanoAvionika has been contracted by Vilnius University to build a satellite platform and a propulsion system for LituanicaSAT-2. The propulsion system is a state of art green monopropellant micro-thruster able to perform high impulse orbital maneuvering and drag compensation capabilities for a small scale satellite. The system is designed to provide 0.3 N maximum thrust and about 200 m/s of ΔV. It is powerful enough to perform impulsive Hohman orbital transfer, orbit shape corrections or even change of inclination for a 3 kg satellite. The fuel used is a LMP103S green monopropellant fuel blend developed by ECAPS (Sweden). The propulsion system is developed by design team from JSC NanoAvionika.