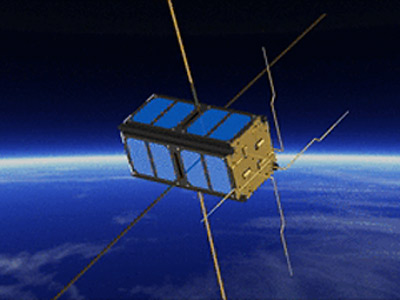 Pegasus is an Austrian 2U-CubeSat designed by the Fachhochschule Wiener Neustadt participating in the QB50 project.

Pegasus is equipped with the multi-needle Langmuir probes (mNLP) for the QB50 project and provided information about essential properties of the plasma in the thermosphere such as the electron temperature and density. It also includes an attitude control system, an on-board computer, telecommunication devices, an electrical power systems allowing to harvest the solar power and either distribute or store it for later use, a thermal control system.

In addition to the above, Pegasus also features a propulsion system which, if successful, would be the first time to use such a system on a nanosatellite. It features a Pulsed Plasma Thruster (PPT) as propulsion unit. The propulsion unit consists of four miniaturized PPTs, so called µPPTs. All four of them are assembled on one Printed Circuit Board (PCB) and can be individually fired. The unit has a typical total power requirement of < 2.5 W with an 1 Hz discharge frequency and weights 294 g. The system of four µPPTs can deliver a total Δv of roughly 5.5 m/s for Pegasus.