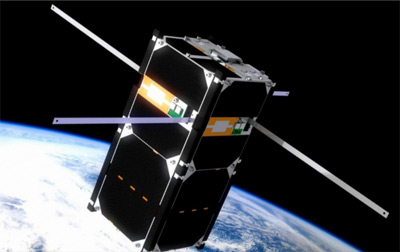 SOMP 2 (Student's Oxygen Measurement Project 2) is a student picosat project of the Techniche Universität Dresden. It is built to the 2U-CubeSat) form factor.

The goal of the project is to measure atomic oxygen of the upper atmosphere, test flexible solar cells and to test the TUD developed Cubesat bus.

On baord are several technical experiments for a thermoelectric generator, a highly sensitive accelerometer and a EMC protection foil.

SOMP 2 is part of the QB50 project and carries the FIPEX (Flux-Φ-Probe Experiment) sensor, which was tested on the SOMP cubesat. The QB50 project, which demonstrates the possibility of launching a network of 50 CubeSats built by Universities Teams all over the world to perform first-class science in the largely unexplored lower thermosphere.

The satellite was launched with the bulk of the QB50 constellation to the ISS in 2017, from where the satellite was deployed on 16 May 2017, but does not appear to work.

A reflight of an identical satellite as SOMP 2b is planned for 2020.