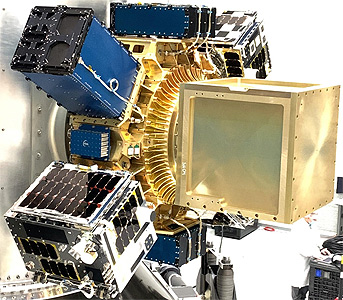 The Sherpa-FX, developed by Spaceflight Inc., is a free flying satellite deployer.

Sherpa-FX is the base free-flyer vehicle upon which all other models are based. Sherpa-FX is primarily used for grouping more customer spacecraft into the volume limitations of a launch vehicle as a port expander, thereby reducing launch costs for those customers. Sherpa-FX includes a sequencer and 1-way communication system, but has no propulsion, attitude control, or ability to actively service hosted payloads. It can deploy up to 16 customer spacecraft, monitor the deployments, and relay mission telemetry to Spaceflight.