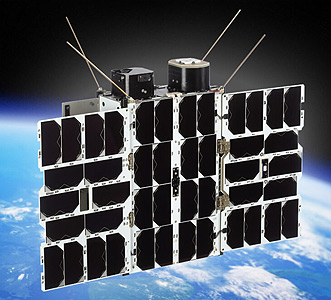 Bravo and Charlie are 6U CubeSats built by NanoAvionics to test and evaluate a spectrum survey payload developed by Aurora Insight.

The payload is a novel, proprietary design and is experimental in nature. The primary objective of the mission it to qualify Auroras payload, consisting of a proprietary spectrometer and components, and demonstrate the generation of relevant measurements of the spectral environment. The results of the experiment will inform future development of advanced instrumentation by Aurora and component development by SpaceQuest. SpaceQuest will also test the effectiveness of a new VHF backdoor receiver that the company designed and built to receive executive commands and/or to reboot the satellite flight computer in the event of a system failure. SpaceQuest will test whether the receiver, with its low-cost design and reduced weight and power, has the ability to function in very small satellites. The technical challenge is to demonstrate in space that a small, low-power radio device can be used to command a spacecraft independent of its traditional TT&C radio equipment. The benefit to the small satellite community is to establish the ability to rescue a spacecraft in the event of a non-recoverable anomaly within an acceptable size, mass, budget and cost.

The satellite will be launched on SpaceX' Transporter-1 multi-satellite launch on a Falcon-9 v1.2 (Block 5) rocket.