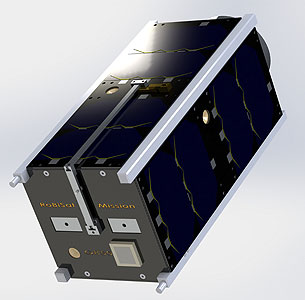 RoBiSAT is a two satellite mission of the Institute of Space Science's (ISS) mission to study the technological solutions for obtaining radio communications for data exchange and commands between two identical satellites located on low-Earth orbit. The mission is flown within the international QB50 collaboration.

The project was started with a research contract in the STAR project competition (2012), coordinated by the Romanian Space Agency (ROSA). RoBiSAT-1 project supports the development of a 2U CubeSat nanosatellite laboratory model  approximate dimensions 20 cm × 10 cm × 10 cm. The development of flight models and the tests and inspections related to the launch and space operation, as well as the operation will be funded through other contracts after the completion of RoBiSAT-1 project. The RoBiSAT satellites will carry m-NLP as QB50 science unit.

The RoBiSAT-1 and RoBiSAT-2 will be launched as part of the international collaboration QB50  a 50 nanosatellites constellation  and will integrate, in addition to the radio communications experiment, tools developed by the QB50 consortium for the atmospheres study. These sets of sensors will be integrated on the board of other satellites launched altogether, and will form a constellation of 50 mini-labs that will measure the characteristic parameters of the earths atmosphere upper strata in different positions, at different times, giving an unprecedented amount of data to monitor in situ the processes of interest, to check and improve existing models. Romania will actively participate also at the ground station network, mainly using the infrastructure developed in previous projects. The communication with the two satellites will ensure the transfer of scientific data required for the lower atmosphere analysis.

The satellite were to be launched with the bulk of the QB50 constellation to the ISS in 2017, from where they were to be deployed, but did not make the deadline for this launch. The mission was was postponed indefinitely.