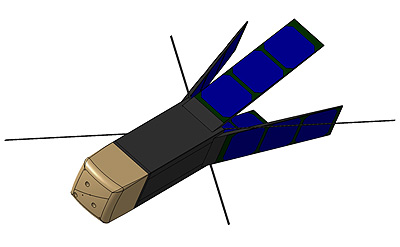 QARMAN (QubeSat for Aerothermodynamic Research and Measurements on Ablation) is a Belgian 3U CubeSat, designed by the Von Karman Institute to to demonstrate reentry technologies, particularly novel heatshield materials, new passive aerodynamic drag and attitude stabilisation systems, and the transmission of telemetry data during reentry via data relay satellites in low-Earth orbit.

The satellite will perform experiments on stability during the orbit phase and measurements of ablation and radiation during re-entry.

The satellite was to be launched with the bulk of the QB50 constellation to the ISS in 2017, from where they will be deployed. The satellite missed the QB50 launch and was later remanifested on the Dragon CRS-19 mission in late 2019, which will deliver it to the ISS for deployment. It was deployed on 19 February 2020.