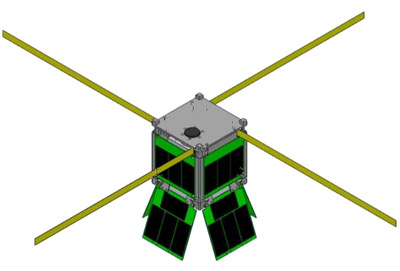 KySat-2 is a cube shaped picosat-class CubeSat satellite powered by solar energy, weighs 1 kg and measures 10 cm on a side.

KySat-2 was built by Kentucky Space, a consortium consisting of University of Kentucky and Morehead State University.

KySat-2 will also test a Stellar Gyroscope, which consists of a single five megapixel camera and a Beagleboard-xM single-board Linux computer. The stellar gyroscope works by starting with two pictures of star fields. First, the brightest stars in the pictures are identified by filtering noise and applying a brightness threshold. Next, an algorithm called Random Sample Consensus (RANSAC) is applied to determine a proposed rotation matrix between the images. RANSAC works by comparing a random set of the brightest stars in both images, then calculating a rotation matrix between those stars, then testing that rotation matrix against the stars that werent randomly chosen. If a threshold percentage of the remaining stars in the first image match up to stars in the second image using that rotation matrix, then the test is completed and the stellar gyroscope reports the rotation matrix as the attitude propagation of the spacecraft.

It was launched on the ELaNa-4 mission. All subsystems were verified as operational on that mission; however, uplink problems at the ground stations and suspected radiation damage prevented the team from validating the stellar gyroscope.