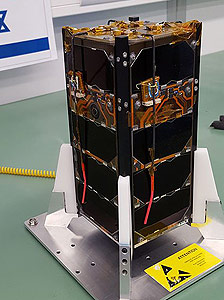 Hoopoe is an Israeli 2U-CubeSat constructed by the Space Laboratory of the Herzliya Science Center as part of the QB50 mission.

As a payload for QB50, the satellite carries a multineedle Langmuir probe (mNLP) sampling the electron density of the space around it, Thermistors and a Magnetometer.