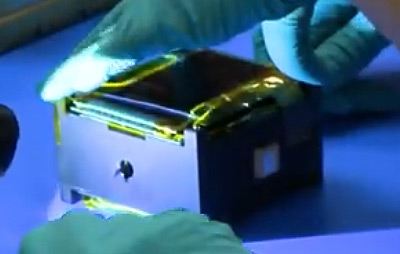 Three identical CubeSat satellites will be launched from the same vehicle; upon deployment, they will initiate an automated commissioning process that includes timedelayed deployment of antennas and solar panels, system checks, and low-power crosslinks to the other spacecraft to transfer commissioning reports and estimated orbital parameters. A tunable software defined radio will be flown on the spacecraft to enable multiple communication schemes, from low-data-rate FSK to high-data-rate QAM, to support diverse messaging requirements at any point during a ground pass. Upon successful commissioning, the spacecraft will await contact from the ground station located in Tampa, FL to enter into the primary mission phase where the primary utility is message passing from the ground station in Tampa to either the same ground station (to prove a store-and-forward message handling capability) or to a tobe- determined secondary or mobile station; further, the spacecraft will autonomously determine their orbital state and proximity to the intended targets for any given message, reducing transmissions to only the amount necessary to successfully complete the message delivery.

The three ARCE-1 satellites were to be launched in February 2020 as part of the DARPA Launch Challenge on the maiden flight ofthe Astra Rocket-3.0. But as the rocket was not able to lift off during the challenge's launch window, the payloads were returned to the owners.

The ARCE-1 satellites were then rescheduled to be flown on a ride-shars mission on a Falcon-9 v1.2 (Block 5) rocket to be deployed from the free-flying Sherpa-FX 1 deployer.