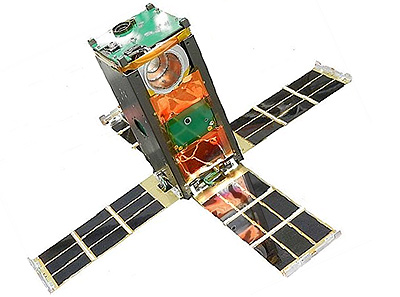 CXBN (Cosmic X-Ray Background) is a nanosatellite designed to make observations of the diffuse X-ray background and publish the data. It is build on a double CubeSat form factor.

The goals of the mission are:

CXBN was launched on the ELaNa-6 mission.

The project team at MSU and their partners tracked the CXBN satellite for 4.5 months (until the end of January 2013). The team collected some data and telemetry, but the SNR (Signal-to-Noise Ratio) was too low on most passes to allow the project to download a significant amount of data. Most of the technology demonstration objectives were met, but the team was not able to begin the science mission in earnest because of the weak transmit SNR owing to an anomalous low power mode.

The science objective of taking a 5% measurement of the diffuse X-ray background will be continued with CXBN-2. In February 2013, CXBN-2 was down-selected for a launch opportunity through the NASA ELaNa program. CXBN 2 was deployed on the ELaNa-17 mission on 16 May 2017 from the ISS.