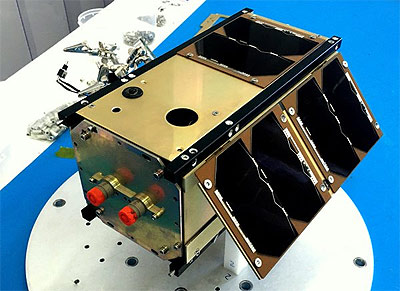 ZA-AeroSat is a 2U-CubeSat for technolgy development and upper atmosphere science. It is developed and built at the Stellenbosch University, South Africa.

The satellite carries four feather communication antennas, which are also used for passive aerodynamic stabilisation. An active momentum wheel and magnetic stabilisation control system is used to damp the aerodynamic oscillations and reduce the attitude disturbances.

The satellite uses magnetic sensors and actuators to do initial detumbling into a Y-Thompson spin after release from its deployer. After a set time after release, all deployables, including the antennas, were deployed. The satellite then starts transmitting a beacon, and start listening for communication from a groundstation. When the appropriate command is received, the satellite activates its full suite of sensors and actuators to orientate itself in the RAM direction. During this process the spin the satellite contains in the Y-axis, is absorbed into a momentum wheel, which then provides the stabilized satellite with a momentum bias. At this point the QB50 science payload was be activated and occasionally the payload star camera were tested. In the case of a fault in the communications is detected throughout the mission, the secondary communications unit would be activated. Science data, telemetry data, as well as images captured by the star and Nadir cameras were sent to the ground station with each communications opportunity.

The satellite was launched with the bulk of the QB50 constellation to the ISS in 2017, from where the satellite was deployed on 18 May 2017, but does not appear to work. After about 2 months, signals were received. The planned in-orbit lifetime of ZA-AeroSat is about 3 months, from deployment to de-orbit.