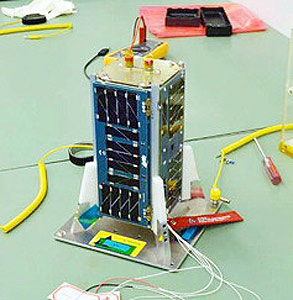 NJUST 1 is a 2U-CubeSat for technology development and upper atmosphere science. It is developed and built at Nanjin University of Science and Technology (NJUST).

NJUST-1 carries one standardized sensor for multi-point, in-situ, long-duration measurements of key parameters and constituents in the largely unexplored lower thermosphere and ionosphere for the QB50 project. NJUST are also preparing to participate in GAMANET, which is an ambitious experiment aiming to create the largest network ever in space. NJUST-1 CubeSat will use the network resources to exchange data, either to receive commands from ground or to send telemetry to its ground station, even when it is not directly in range of its ground station.

The satellite was launched with the bulk of the QB50 constellation to the ISS in 2017, from where the satellite was deployed on 25 May 2017. The in-orbit lifetime of NJUST 1 is about 3 months, from deployment to de-orbit.