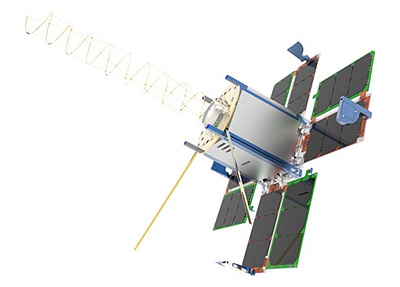 Prometheus is series of 1.5U CubeSats for technology development and demonstration. It was developed by the Los Alamos National Laboratory (LANL) with the dual objective of evaluating new low-cost development and operations methodologies while also assessing the operational utility that can be provided with CubeSat technology. It was DoD funded.

The Prometheus system consists of CubeSats along with supporting ground and field segment equipment, all designed as an integrated system. LANL is serving as the primary builder and system integrator and will perform on-orbit system checkout, test, and evaluation. The satellites were based on the earlier Prometheus and Perseus satellites. The Prometheus satellites cost less than $100,000 each, are expected to have a service life of three to five years and are demonstrating the capability to transfer audio, video, and data files from man-portable, low-profile, remotely located field units to deployable ground stations terminals using over-the-horizon satellite communications. Each satellite features four deployable solar arrays and a deployable helix antenna. The second generation Block 2 satellites feature several improvements. The solar arrays have been enlarged and the attitude control system has been improved. An star field sensor and a GPS receiver were added. Also they provide the opportunity for hosted payloads, as a 1.5U payload module can be added to each satellite.